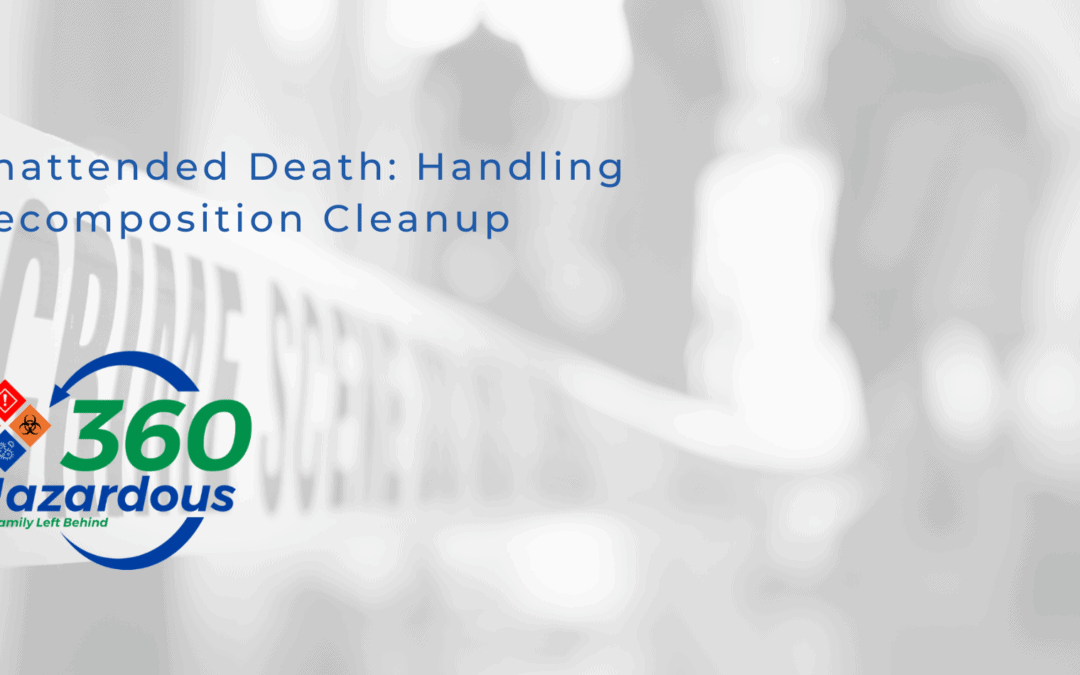 When somebody has died alone, and people discover it after quite some time, we call it an unattended death. Sometimes people discover remains of such bodies after a few days or weeks and maybe even longer than that.

Such a situation calls for a death cleanup process, which is possibly hazardous and dreadful. After an unattended death, the specific difficulties and possible risks of a biohazard cleanup need specialized after death cleaning services from an expert biohazard cleanup service organization.

Learning about the Science behind Decomposition

First of all, you should know the science of human decomposition. It is a prerequisite to understanding what it takes to handle a death cleanup after any unattended deaths. The science behind body decomposition says that after somebody dies, the dead body’s bacteria start breaking down different tissues. Such a breakdown process essentially begins from inside the pancreatic and intestinal area. After the bacteria successfully breaks down these two organs, they explosively spread to the other parts of the body. They spread throughout the body in a geometric progression. There are five primary stages of any decomposition:

If we talk about an unattended death, people usually don’t discover the deceased person’s remains until the third stage or later, where the body is in an active decay mode. After reaching the third stage of active decay, the body releases hazardous pathogens in different solid, fluid, or gas mediums. This decomposition stage makes the unattended death site dangerous for living beings.

Microorganisms in the form of pathogens constitute a biohazard, which poses a potential risk to individuals’ health and are harmful to the environment on an overall basis. As already discussed above, the decomposed bodies lead to biohazard. Still, pathogens may be present inside an individual’s system as a biohazard without the presence of any onset of the decomposition process. It may happen due to genetic diseases or other conditions. They may be present inside the individual’s system because of some bloodborne diseases in the body or on the body of any individual. Such pathogenic microorganisms usually enter the body by contacting other individual’s body fluids or blood cells.

To handle biohazard cleanup after an unattended death, the use of suitable Personal Protective Equipment (PPEs) is crucial. OSHA or CDC must approve such PPEs related to after death cleaning services for biohazard cleanup.

Every personal protective equipment gear should mandatorily include a few necessary components as follows:

The moment you discover an unattended death or remains of a decomposing body, you must initiate the death cleanup process. It implies that the individual who found the dead body after an unattended death should begin to use the protection procedures related to exposure to biohazardous elements right at that moment.

The person discovering the remains of a deceased individual can quickly determine if the unattended death is more than two days old or not. We have already mentioned that usually, people discover the remains in later stages where the body has already decomposed to no small extent. There is a high probability that People find the remains much later in the decomposition stages.

Consequently, dangerous pathogenic microorganisms might have already spread from the body to the site of death. Here, it is imperative for the person who found the remains to immediately leave the area and call the emergency number 911 to report the unattended death.

The individual should also try to ensure that he also keeps others away from the site of an unattended death. After some time, an emergency medical team may arrive at the area with the law enforcement agency officials to ensure isolation of people from that site.

Here are the most probable reasons for an unattended death:

Before releasing the site for biohazard cleanup, investigating agencies need to complete their work. Such agencies include the investigators from the DA’s office, coroner’s office, and other law enforcement personnel.

Different Stages of Death Cleanup After An Unattended Death

No untrained person should start the biohazard cleanup after an unattended death, neither any family member nor the property owner. At this stage, we should engage professional after death cleaning services for biohazard remediation. Besides, we never suggest bearing such an emotional trauma of death cleanup, especially if you lose a loved one in this way.

The death cleanup process must begin at the earliest possible because any biological discharges of decomposition have the potential to damage the site permanently. If you want to minimize the overall damages to the death site, please arrange to start the biohazard cleanup process as soon as possible.

After an unattended death, the biohazard cleanup process has the following four stages:

360 Hazardous goes beyond standard procedures. We have over 35 years of extensive, professional, and compassionate experience in handling biohazardous waste in the industrial hygiene field. We are well-versed in dealing with such situations and can quickly resolve your issues with compassion, putting the needs of the family first. Call our team of experts 24/7, as we give overriding priority to your needs.